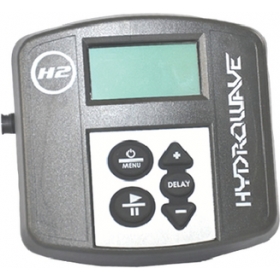 The HydroWave is an electronic fishing device created to emit the sounds of a predatory fish engaged in feeding. HydroWave incorporates both Lateral Reactive Technology (LRT) and Vibration Reactive Technology (VRT) to elicit predatory feeding responses. Our products act as an underwater manipulative, like bait; however, it communicates to the fish?s primary sensory system, the lateral line, which allows fish and amphibians to perceive and localize movements in their vicinity. It is involved in important behaviors such as prey detection.

Technology
When the HydroWave is turned on, it sends out reverberations to a bigger fish?s lateral line, creating a reality for them that there are smaller fish around and fellow fish are feeing on them. The bigger the fish?s natural competitive instict drives him to want to feed as well. This is how HydroWave ?Ignites a Feeding Frenzy? and gives fishermen a considerable advantage in catching a greater number of fish. The HydroWave H2 is used by over 95% of professional anglers.

HydroWave™ Science
Tactile Sound Transmission (TST) is the primary output of the HydroWave?s speaker system. Finely tuned amplifiers deliver the tactile sound. Tactile sound is different from ordinary sounds because it is sounds that you can actually feel. The concept is easy. If you have in earplugs you will not be able to hear people talking around you but you will feel the sound of a sub-woofer. Fish hear on that type of tactile level and frequency. The same frequency and sound produced by the HydroWave.

"Product as described. Arrived in perfect condition. Very fast shipping. Excellent seller."
"Very fast service and shipping. Will definitely order from BoatersPlus in the future I'll be back "
"fast shipping, great products. hi-bond qcell is super light and easy to fill. great price"
"You website provided great pictures & descrptions of the products and the items were delivered..."
"Received order very fast, and exactly what I ordered! Very pleased, and will be a return customer!"
More...