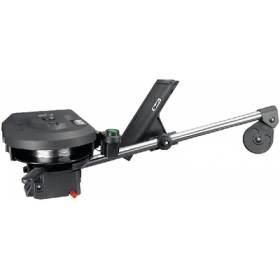 Downrigger fishing is a whole new style of trolling. It may take a little while to get used to it, but after you begin to catch fish with it, you'll never go back to using heavy tackle. Unlike conventional trolling, the first evidence of a strike may show with just a wiggle of your rod tip or yourdownrigger pulley. When a fish strikes, your rod tip goes up, the line will momentarily go slack and you now have your fish on the line with no weight at all! Quite often, the fish will rush to the surface (with no weight to hold him down) and put up a spectacular fight right on top.
Scotty Electric Downriggers have reached the highest performance and reliability standards ever. These all new designs feature illuminated digital counters, unbeatable pulling power, adjustable stainless steel jacketed rocket launcher rod holders, and a clutch brake with the largest braking surface in the industry allowing for ultra fast speeds. Spooled with Scotty HP Downrigger wire, made from tough stainless steel. Superior 1/2" Kevlar drive belt - the same belts used by superior European auto manufacturers.

"Got the part (obsolete in many stores) and it is exactly like the original."
"great! great price, great service and quick delivery. I recommend Boaters Plus to all ppl who..."
"I was heading to Canada in three days and needed to change out 6 coil packs on a GT150. Not only..."
"Got my order the next day and all of the Star-Brite line is perfect! Ill always get my cleaning..."
"Super fast shipping, cheapest price on the net! I would buy from Boaters Plus again! Thank you!"
More...